Steve and I only had one full day in Paris last fall, so when we learned we were going back to London, I booked a train to Paris for two days. I planned to take in the sights and sounds solo, but by good fortune, my college roommate, Natalie, who is currently traveling the world, was in Western Europe at the same time. She and her traveling friend, Katy, were able to arrange their schedules to join me for two days in Paris!

In the US, you show up 5 minutes before Amtrak leaves, hop on the train, and you’re set. Eurostar used to be like that, but what I took as a suggestion to arrive 30 min before your train is actually a requirement now. Oops.

After missing Train #1, I paid to get on the next train, went right through security, and stopped dead in my tracks. I’d forgotten my passport in the hotel safe. SERIOUSLY!? At this point, looking back, I’m glad that I was meeting Natalie because otherwise, I likely would’ve thrown in the towel. Instead, I hopped on the Tube back to the hotel, back on the Tube, and paid AGAIN to change my ticket.

After all of that, I was on my way to Paris! I easily found my Airbnb just 5 minutes from the train station and met Sandra and her husband and daughter. (It was my fist time staying with others!) They were all lovely and not at all intrusive; I just came and went as I pleased. (They were also kind enough to let me come early to drop my bag and held it for me the next day so I didn’t have to lug it around Paris.)

Natalie and I had been messaging and sent each other THE EXACT SAME PLACE to meet in Montmartre (eerie), La Cave Gourmande, which didn’t feel too touristy. It was SO crazy to walk around the corner to see one of my closest friends running toward me; we hugged and I said, “I cannot believe that we’re seeing each other — IN PARIS.” It was all a little surreal.

Katy and Natalie told me all of the tales of their amazing travels while we had some red wine and a light lunch. We popped into a few shops and I took them to see Sacre Coeur, the beautiful chapel overlooking the city that Steve and I visited in the fall. We walked through the church and wandered the streets, in awe of the gorgeous old homes and shops.

As we passed Montmartre Cemetery, I asked, “Sooo, how do you guys feel about cemeteries?” Cemeteries in Europe are totally different; they’re really pieces of sculptural art combined with parks. (Remember San Miniato in Florence?) Luckily, they were totally into it. We checked out the map and saw that Degas was buried there, so we set out to find it. After a lot of walking/getting a little lost, we found it.

We found a metro station and took it south so that we could go to the Eiffel Tower. There was a lot of security because of the Euros (soccer), but we got through quickly and hiked the 669 steps to the second platform for an unreal view of the city. We bought wine and settled in for the sunset, which didn’t happen until almost 10pm. 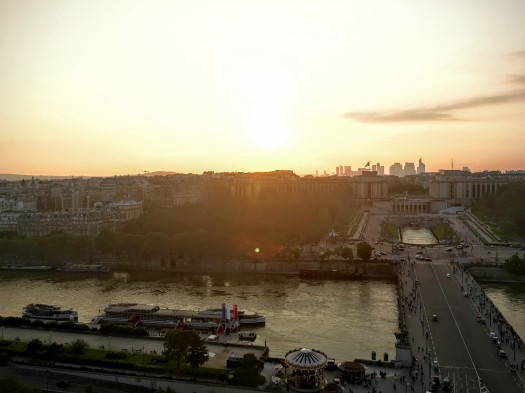 Since Natalie and Katy were staying in the 17th, we went back to Montmarte for dinner. It was almost 11pm, so options were more limited, but we settled on Cafe Marcel. I indulged on a dinner of only red wine, bread, and cheese after walking more than 14 miles … and IT. WAS. AMAZING.

I struggled to wake up on my second day in Paris; my loft was SO HOT and the bed was not the most comfortable, so I only got a few hours of sleep. I grabbed a croissant at a local boulangerie and  met up with Natalie and Katy at the D’Orsay Museum after a bit of a detour due to a flooded metro station. We enjoyed it, but were sad that several areas we wanted to see were closed for renovations.

I can’t recall where we had lunch; it was a small cafe on an adorable street in St. Germain des Pres. I knew that we were close to Luxembourg Gardens and it was a gorgeous day; I really wanted Katy and Natalie to see it. The park was packed and kids were out with the push boats; it was really idyllic. 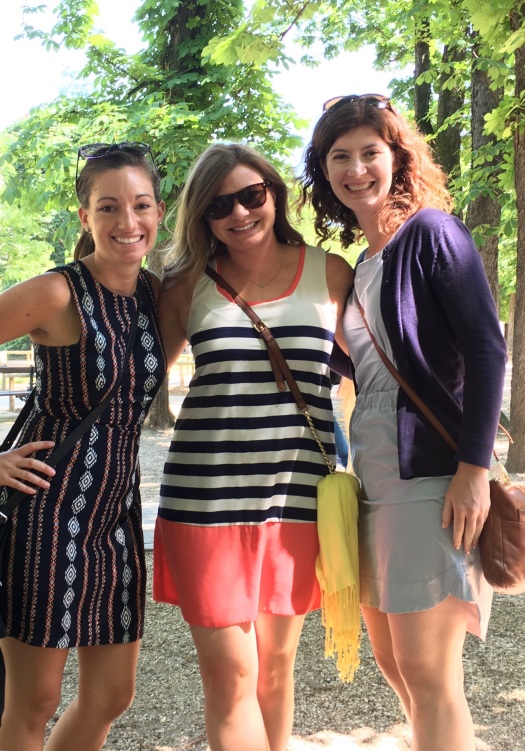 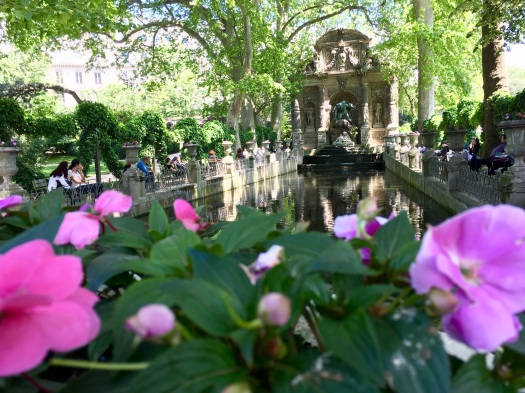 The one thing that I really wanted to do was see inside Notre Dame; Steve and I were only able to walk past it last year. We waited in a pretty quick line to check out the (free!) 800+-year-old church. The French-Gothic architecture is absolutely amazing and Katy gave me a quick religion lesson so I’d better understand the purpose of the different areas. Between my love of art history and architecture, I was in complete awe the whole time. The line for the towers was pretty long and I had to be back at my Airbnb by 5pm to get my bag and catch the train back to London, so we skipped it — but next time!

We walked through le Marais neighborhood; now see why my friend Emily always stays there. It had such a cool, young vibe and so many great shops and restaurants. (I’ll definitely be staying there next time.) We checked out Marché des Enfants Rouges, Paris’ oldest covered market, which was mostly closed at 4pm but looked like a great place to grab lunch.

I said my goodbyes and was on the 6pm train, back in time to have dinner with Steve in London!

While I had the most amazing time with Natalie and Katy, Paris didn’t enchant me as much as it did the first time. It felt a little dirtier, a little grittier. That said, walking through Le Marais made me realize how much I haven’t seen (and how much I want to spend time in that neighborhood), so I definitely plan to go back to take in more of what Paris has to offer.