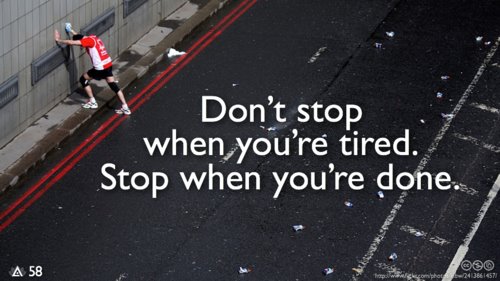 In two weeks, Steve and I will be headed down to Charlottesville, VA to run the Charlottesville Half Marathon, so I figured this was a good time to check it and let you on how my training is going.

To start, I’m not sure that I will ever do another race so early in the year. The beginning of April is still the very start of race season, and it’s been tough to train with all of the crazy weather. The majority of my training runs have been on the treadmill, which has given me a chance to do a lot of intervals and control my speed, but I feel like I haven’t had as much practice out the terrain. Thankfully, it seems like at least the next two weeks will give me some opportunities—minus the freak snow on Tuesday.

As far as endurance goes, I’ve been feeling pretty good. I missed my 12-mile run last week thanks to the ridiculous random snow, but I have 13 miles on my plate for tomorrow and feel okay about it.

Right now, speed is what is concerning me. I was looking back at training runs before my two previous half marathons and I feel like I was doing my runs at a faster pace than I am now. My goal is to do the first 1/3 of the half marathon around 9:00 pace, the next 1/3 around 8:50, and then the 1/3 around 8:40. Right now that sounds really fast—but I hope that going out more slowly will help me build up speed toward the middle and end. I have a tendency to go out way too fast and I burn all of my energy in the first half of the race. (There’s science behind that.) 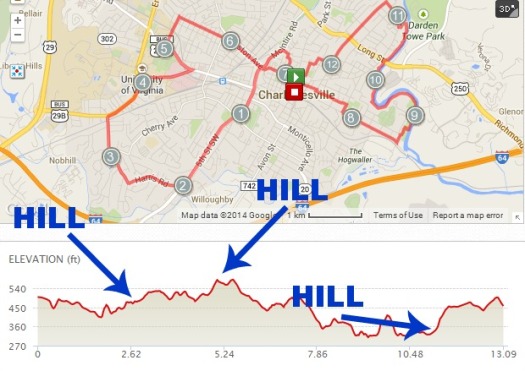 Charlottesville is supposedly quite hilly and I took some time to look at the elevation that the other day. It looks like the majority of the hills are in the first half of the race. There is a fairly significant hill around mile 11, so I need to save some physical and mental energy for that.

Overall, I’m feeling like this will be a decent race but it may not be my fastest. I’ll report back in two weeks!

Anyone else training? How are you feeling?