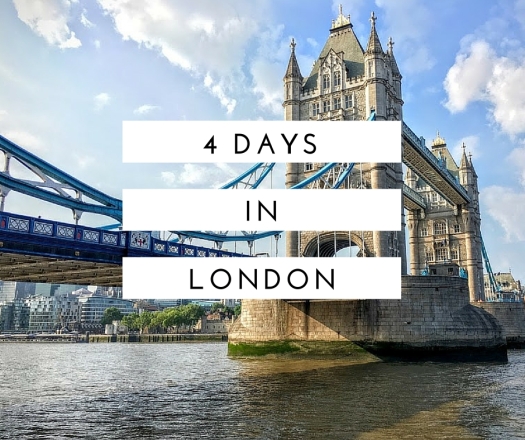 When Steve heard on the day we returned from Turks & Caicos that he’d be going back to London for a week for work, I WAS SO EXCITED. I loved London in the fall and was so excited to see it in the spring. While I was in the city, I’d be working remotely, so I chose three different neighborhoods to spend time in while working: Notting Hill, Chelsea, and Shoreditch.

I was also really excited because Steve and I didn’t have a day together in London last year,  so to fly there together and have all day Sunday (and dinner some evenings) was a big plus.

After an easy flight and quick ride on the Heathrow Express (which I highly recommend) and then using the HailO app (no sponsorship — it was just awesome!), we were at the Grange Tower Bridge, just north of the Tower of London and the Tower Bridge, both of which I visited last fall. It was a great location, much closer to things that stayed open in the evening, unlike our previous hotel. We set off to get lunch at Spitalfields Market, which was bustling. We perused the stalls and I picked up a cute dress. We grabbed chicken naan wraps at Scarlet Grill, which were so messy but so good. 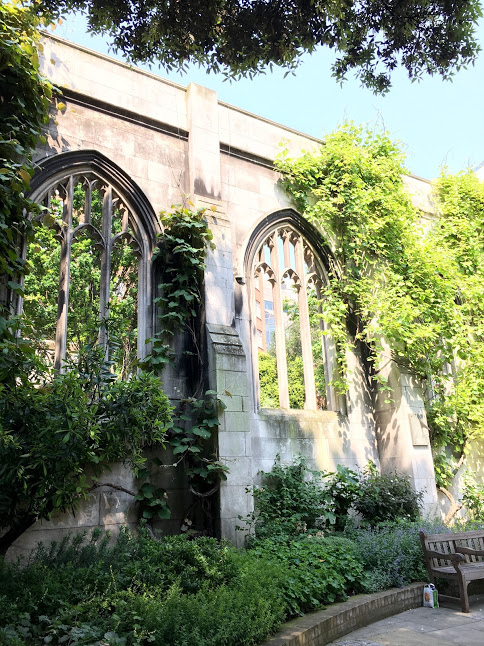 After lunch, we walked a good distance to St. Dunstan-in-the-East, a church from 1100 that had been destroyed during the London fire and the blitz of WWII. The old structure is now a small park and was so gorgeous. Then we walked to St. Katharine Docks (which I was excited about since they spell Katharine like my Katharine!) The marina is a gorgeous mix of old and new with lots of shops and restaurants. It’s so cool to know that places like this have been around for 1000+ years. 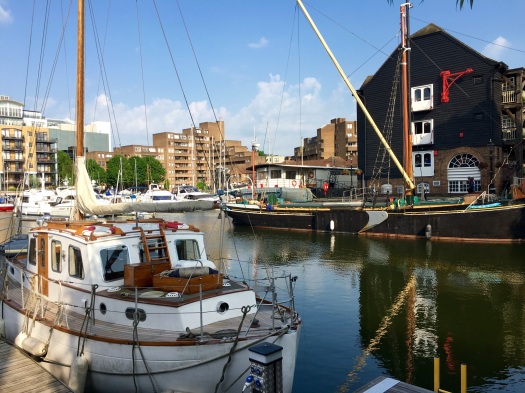 We crossed the Tower Bridge to Butler’s Wharf, one of many wharfs along the River Thames. It’s also converted to mixed use space and made for a gorgeous walk. (The area is also called Shad Thames, if you’re researching.) From there, we went to Bermondsey Street in Southwark (not pronounced SOUTH-WARK — it’s SOWTHERK.) Southwark is a cool up-and-coming neighborhood, home to Borough Market, the Tate, and Shakespeare’s Globe Theatre.

I wanted to go to Jose on Bermondsey, but they were closed, so we walked the street, checked out the shops, and ended up at Woolpack for a drink before dinner. EVERYONE was having the Sunday roast and hanging out on the back patio, which was soaked in sun — abnormal for London. (Steve had a really good IPA here, Beavertown Brewery Neck Oil, which was light and kind of floral.) We decided on Garrison Public House for dinner, where I had an amazing beetroot gnocchi with watercress, cashews, and Brie sauce, and Steve had the fish and chips. (I stole his mushy peas — YUM.) (Also, it’s listed as pretty expensive, but it wasn’t at all.)

Jet lag was kicking in hard core, so we walked back over the bridge and passed out by like 11pm.

I vowed that if I took up space with running stuff when packing, I was going to go. I set off early over the Tower Bridge, along Butler’s Wharf to Southwark Park. I got a little lost looping through and ended up doing 5 awesome sightseeing miles.

I hopped on the Tube and went to Notting Hill to Granger & Co, which Casey recommended. I had wifi, an outlet, and an excellent acai bowl and avocado toast. Oh, and tea! Of course. Perfect to knock out a few hours of work.

During lunch, I walked along Portobello Road to check out the market, which was less impressive than I thought. I guess it was a Monday, so it wasn’t as lively, but it was kind of standard vendors.

I set up office #2 at Continental Pantry, which had a very cool vibe and good food. (I loved my prosciutto and fig sandwich and chocolate croissant.) The cafe had colorful couches, quirky lighting, and was quiet for the afternoon. After work, I went to Kensington Palace, which was closing the last time I went. I was so sad that the newest section about Diana and more recent royals was closed, but I still loved seeing the palace and thinking that I was SO CLOSE to the royal family. (British police, I don’t mean that in a creepy way.)

After a quick stop at Zara (of course) and a bike ride through Hyde Park (because who can resist?), I met up with Steve to go to dinner. We stopped for drinks at Commercial Tavern, which is such a cool place. I had a massive gin & tonic (they have a whole G&T menu!) and couldn’t stop looking at the space. It was kind of like grandma’s house, if grandma was super cool and hip and fun.

Dinner was at Hawksmoor Spitalfields, which I was told is THE place to go for steak in London. I don’t eat red meat, but Steve does, and he throughly enjoyed it. I attacked another plate of pasta — ricotta dumplings with spring veggies — and loved it. We split (aka I ate 92% of) THE MOST AMAZING DESSERT, the sticky toffee pudding with clotted cream. I don’t know what the hell clotted cream is, but this dessert is SO FREAKING GOOD. I could smell the chocolate and toffee as soon as we walked in and salivated every time I saw someone order it.

On Tuesday morning, I got in another run along St. Katharine Docks to Wrapping, lucky to have another gorgeous day on the water.

Before I left, my colleague put me in touch with the Groupon UK comm team, so I stopped by the office to meet them. They have an amazing view of the Thames and it was awesome to hear what they’re working on and similarities/differences between Europe and the US.

Before I went to my next coffee shop, I stopped at the Natural History Museum to see the architecture. It’s mind-blowing to see these structures and imagine how they created them. I walked through South Kensington to Chelsea and set up shop at L’etto Caffe, where they kindly let me hog the outlet. I had a gorgeous egg white omelette with spinach & tomatoes with sourdough toast.

I had to check out the shops on King Street and at Duke of York Square, but quickly realized I couldn’t afford to shop at any of them. It started raining and I had to get on a call, so I ducked into Polpo, a cute Italian place. One thing I love about Europe is that because the countries are so close, you’re getting a guy who is actually from Italy running the place. The broad bean, mint and ricotta bruschetta was so good, even though it sounds kind of weird.

Dinner that night was at Dickens Inn at St. Katharine Docks, which had reasonably good wood-fired pizza, but the service was pretty terrible. I had to be up early and it was close, so it worked.

Day 4 was actually two days after Day 3, with a quick trip to Paris in between, which I’ll post about soon. Since the day was a little shorter because of travel to Amsterdam, I stayed in the area and hung out in Shoreditch. How could I resist a place called The Book Club?? There are no books inside, so I’m not sure where the name came from, but it was great food and a perfect work space. (I wanted to swap out the poached eggs for scrambled egg whites, which was very difficult for them to understand, but they got it.) 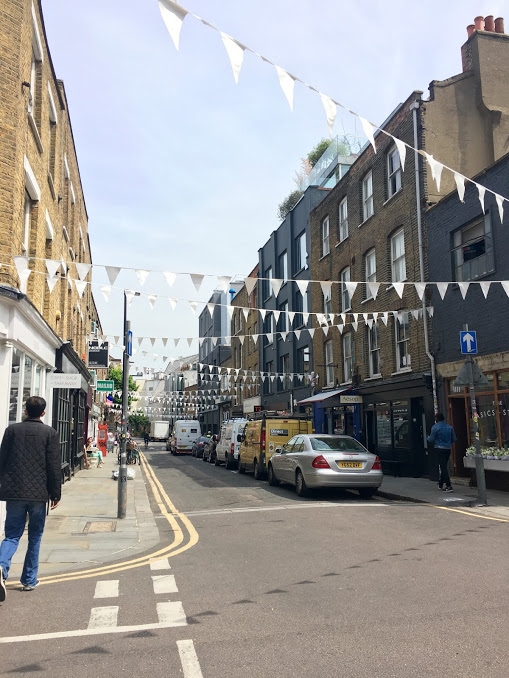 With the little time that I had, I ventured to Redchurch Street, a great shopping area, and stopped at Labour & Wait, which I’m fairly certain is the most Instagram’d shop in London. It’s so cute and the owners were really nice. I popped into a few more places and then checked out BoxPark, an awesome former shipping container turned into shops and restaurants. The top is all food and drinks and the bottom are basically micro shops.

Off to Amsterdam! (But the Paris post will come first.)

Remember how I wasn’t super excited to go to London the first time and then ended up loving it? I love it even more now. Obsessed.